My traditional (film based) camera had a simple mechanical self‑timer, which, with the camera mounted on a tripod, allowed me some 8-10 seconds to run in front of it and mimic a position as if someone else had taken the shot. Like in this example, which was taken by me when I was alone.

Now most of the cameras are equipped with all kinds of advanced electronic stuff. Why not benefit from them ?

The market already offers simple Bluetooth based remote control for taking photos with Android and iOS based mobile devices, mostly designed for “selfie” usage. One button for photo capture and that’s it. On the other hand, for some reasons I insist to continue to use a Symbian based mobile phone as my primary phone – the 808 PureView equipped with a high quality camera especially in terms of resolution, or sometimes even the older N8 whose camera get better colors than the 808 – with whom those simple “selfie” Bluetooth remote controls does not work.

However, by investigating the functioning of those remote controls, I found a working solution for my 808. Even a very good one !

A simple “selfie” Bluetooth remote control proved to use a Human Interface Device (HID) profile. Simply put, it is just a simplified Bluetooth PC keyboard with only two keys. Pairing this one with my 808, the thing that worked was volume up by pressing the bigger ‘CAMERA 360 iOS’ button.

So I paired the remote control with my laptop and then I used Gary Darby’s Key Scan Codes utility to get the key codes generated by this “keyboard”.
The result were as follows:

According to the CameraPro Qt 3.x for Symbian^3 user manual, basic camera controls are available within the application by using an original Nokia wired headphone remote control, such as the Nokia AD‑54. The supported controls are zoom in, zoom out, focus, capture photo or start/stop/pause/resume video recording and turning on/off video light during video recording.

After some research I have chosen the Coco CC-PC101 Bluetooth remote control model, by relying on several criteria: it looked like a traditional remote control without being painted in some fluorescent girlie color, it appeared to include the full set of audio controls presumably working the same across multiple operating systems and it happened to be available at a local photo equipments store at a reasonable price, sparing me from waiting times on eBay (or the like) delivery.

My assumption was correct: it simply works ! And it works the same with both CameraPro Qt 3.x version and CameraPro NET Edition (I have both, the standard Qt version on N8 an the NET version on 808); in terms of this article, there is no need for the specific NET Edition for this (or other equivalent) Bluetooth remote control to work.

The correspondence summary between the CameraPro functions and the remote physical keys are described in the chapter (i) above. I also found out most of the generated key codes by pairing the remote with my laptop and running again Key Scan Codes utility mentioned earlier.
These are as follows (the names of key icons are as per its user manual):

A (somewhat) visual correspondence between remote control buttons and CameraPro basic controls is shown below (click on the image for a SVG version):

Note: the SVG may not be viewable with Microsoft Internet Explorer.

In open space the maximum distance covered was around 10-12 meters away from phone, which is the usual range for class 2 Bluetooth devices.

To be noted that this Bluetooth remote control (or other equivalent) also works with the phone’s built-in media player, in the same way as the original Nokia wired headphone remote control works (this means the six multimedia control keys – ‘Play/Pause’, ‘Previous track/Fast forward’, ‘Next track/Rewind’, ‘Volume up’, ‘Volume down’ and ‘Stop’ (labeled ‘Mute’ here)); however, the ‘Call/Answer’ button/function is missing on this one.

I’m sure there are other Bluetooth remote control models available on the market which happen to include – more or less – the same set of key codes, which in turn offers the corresponding functions. 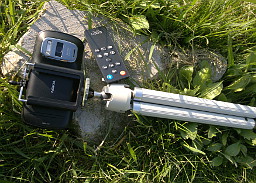